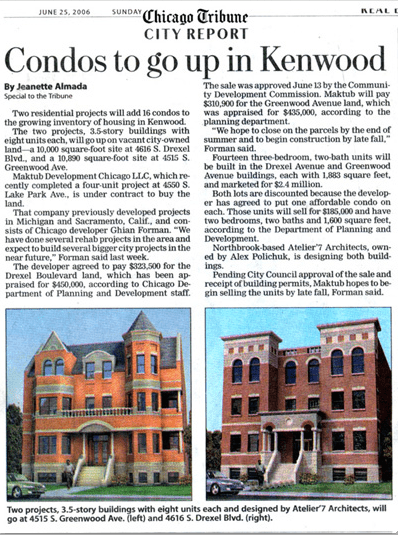 Two residential projects will add 16 condos to the growing inventory of housing in Kenwood.

Maktub Development Chicago LLC, which recently completed a four-unit project at 4550 S. Lake Park Ave., is under contract to buy the land.

That company previously developed projects in Michigan and Sacramento, Calif., and consists of Chicago developer Ghian Forman. “We have done several rehab projects in the area and expect to build several bigger city projects in the near future,” Forman said last week.

The developer agreed to pay $323,500 for the Drexel Boulevard land, which has been appraised for $450,000, according to Chicago Department of Planning and Development staff. The sale was approved June 13 by the Community Development Commission. Maktub will pay $310,900 for the Greenwood Avenue land, which was appraised for $435,000, according to the planning department.

We hope to close on the parcels by the end of summer and to begin construction by late fall,” Forman said.

Fourteen three-bedroom, two-bath units will be built in the Drexel Avenue and Greenwood Avenue buildings, each with 1,883 square feet, and marketed for $2.4 million.

Both lots are discounted because the developer has agreed to put one affordable condo on each. Those units will sell for $185,000 and have two bedrooms, two baths and 1,600 square feet, according to the Department of Planning and Development.